Let It Go, What Gets you out of bed in the morning 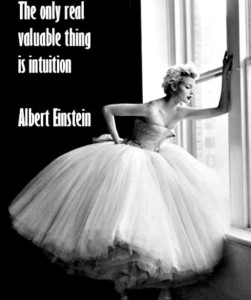 For the last few weeks my gut instinct has been trying very hard to communicate with me about a decision I needed to make but I chose to ignore it and kept telling myself I was being stupid and everything would be okay. I tried to rationalise my way of thinking with positive thoughts and visualisation all in an attempt to overcome the fear that was presenting itself to me but it didn’t matter how much logic I gave to the situation the outcome was still the same.

So rather than it just being a “feeling” in the early stages, I then started to feel sick to the pit of my stomach and felt nervous in almost everything I was doing, my energy levels dipped and I began to lie awake worrying. Not many things interfere with my sleep so I knew that I could no longer ignore the signals that my body was now trying to communicate loudly to me. I had to address what was causing me to feel so uncomfortable and to make a very difficult decision, but how to do this.

I sat quietly, and imagined two scenarios, one with the current situation that was causing me to become so nervous and one without. I tried to see if I could work through the current situation and thought of the many ways I could do this with all the support around me, but I still didn’t feel it was the right choice for me and still felt uneasy. I then tried the scenario with the situation removed and I immediately felt lighter, like a weight had been lifted from my shoulders it was then that I knew what my decision had to be.

It was not an easy decision to make and didn’t just involve me and that’s why it took me so long to really listen to my gut instinct, even though my gut instinct has never failed me before.   However once my decision had been made I felt so much better, so again my gut/intuition was giving me feedback that I was doing the right thing and had made the right choice.

Sometimes there is absolutely no logic to gut instinct, we can’t put a reason to it but we just have a feeling in the pit of our stomach. That is why we usually prefer to believe our decisions are made by our brain and logic. However, rather interestingly the enteric nervous system lies in our intestines with hundreds of millions of neurons, these neurons communicate with the brain. The clearest connection between the gut and mind is how we experience anxiety and stress. A gut instinct is when we have a reaction to a situation that we aren’t entirely happy with or are uncomfortable with.  I was becoming more and more stressed by my situation.

Also you may have heard the saying “in my heart of hearts” again, the heart has its own independent nervous system which connects to the brain. Sometimes we just know, how many times have you heard happily married couples say they “just knew” that their partner was the right one. If you ask them how they knew they will not be able to give a reason other than they just knew.

Not everyone is tuned into their intuition or are familiar with listening to what their bodies are trying to communicate but next time you are struggling with something whether it’s a difficult situation or decision to be made, sit somewhere quietly, take your time and imagine both scenarios, be aware of how your body feels at each outcome. The scenario that gives you quiet and calm is more than likely to be the right decision for you.

I would love to hear from you if you have experienced something similar, for example when you met the love of your life, or had a difficult decision to make.

Wishing my lovely readers a happy and love filled week.

8 thoughts on “Do you listen to your intuition and gut instinct?”